Homeowners frequently ask if foundation repair makes a house perfectly level. It’s important to keep in mind that if a house foundation is level to within 7/10 of an inch, that is generally considered acceptable. While foundation repair can make a house almost level, it does not make it perfectly even. 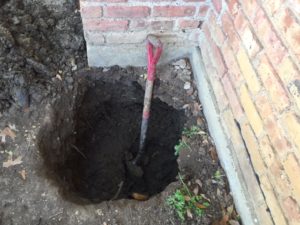 It’s because foundations aren’t exactly level when they’re created. Concrete slab foundations are poured more thickly in some areas than others. Over time, some sections of a slab are exposed to higher levels of moisture than other areas. This causes foundation settling and sinking. It’s very common in areas like Dallas, Fort Worth, where expansive clay soil creates the need for house leveling.

Of course, pier and beam foundations aren’t perfectly even either. They are susceptible to water and weather conditions as well, Through the years joists and wooden beams experience some degree of movement. These types of foundations often benefit from the installation of foundation shims. These thin pieces of metal are often installed under concrete slab foundations, too.

If a structure has severe structural foundation damage, attempting to make it as even as the homeowner would like could further harm the house. That’s because when a foundation is exceedingly unlevel, lifting it high could cause major fractures. This is what is commonly referred to as “collateral damage.” As you can imagine, if a home is 4″ low in some areas, pulling it up that much could cause it to break. It could also lead to roof damage.  For this reason, it’s important to consult with a qualified foundation repair contractor if you have concerns.

In a situation such as this, an experienced contractor will attempt to raise the structure to the “best possible elevation.”  This means they will try to make the foundation as even as possible, without causing severe collateral damage. In some cases, sheetrock cracks and wall or floor crevices simply cannot be avoided. Lifting a foundation a whole lot can also leak to broken plumbing pipes. And keep this in mind:  Sometimes a contractor doesn’t know exactly how level they can make your home until they see how it is responding to the repair process. To avoid foundation issues such as this, it’s best to have your structure serviced as soon as you notice problems. To learn more, contact HD Foundations.

“Thank heavens we found this company. They installed 14 piers around our slab foundation and now the floors are(...)

*Minimum of 10 foundation piers. Must mention this offer at time of free estimate. Applies to house foundation repairs only. Offer expires 10/31/22