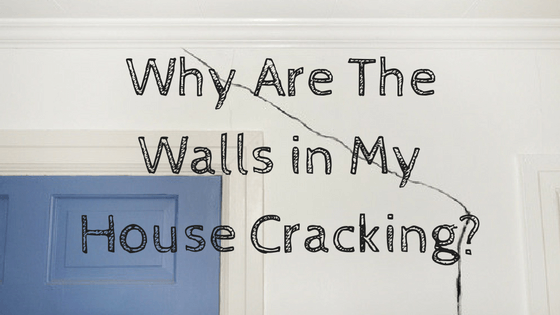 One of the most distressing sights for a homeowner can be the presence of cracks in their walls. That’s because the possibility of seeing major damage occur on what is likely to be their largest investment can result in a sinking feeling. One of the best ways to limit potential damage is to understand why those wall cracks have developed in the first place.

Listed below are a number of key reasons for this problem:

Areas that have relatively stable climate throughout the year don’t tend to have this issue since their change of seasons is mild at best. In contrast, those with hot summers and cold winters (such as in North Texas) will often discover that their foundation has expanded and contracted just enough to cause cracks. This is a fairly common scenario for homeowners. If the crevices are large, you may require professional foundation repair. Tiny hairline cracks are generally not a concern andsome spackle followed by some paint should be sufficient.

A more direct example with regard to weather can be related to the traditional hot summers in Texas. That means that houses can see day after day of what can be a brutally hot sun beating down on a home. Over a period of time, that can have a negative effect on the wall, with a simple solution being to keep the color of that wall light.

The presence of a crack that begins at ceiling level and continues on a path down the side of a wall is a much more concerning situation. This is likely the result of the house settling. While small cracks shouldn’t be ignored, the sight of larger ones are a clear indication of foundation problems that should be addressed as soon as possible. Disasters such as floods or earthquakes that cause movement can also create gaps in walls.

This problem may seem obvious, yet many people that purchase new homes can find themselves dealing with cracked walls that are the byproduct of shoddy construction. Foundation or drywall installation can sometimes be rushed or be done by someone simply not experienced enough to handle the job.

Something as simple as the weight of a light fixture or other wall objects can eventually lead to a crack in the wall. The weight of the item in question will play a role in just how large a crack of this nature ends up being. To avoid the concern, awareness of such incidentals is something to remember.

Lack of or Excess Soil Moisture

In areas that get small amounts of rain, soil (especially clay soil) becomes more vulnerable to drying out. That causes a home’s foundation to sink or crack, which then leads to wall cracks. These crevices will only get worse without foundation repair service. By the same token, too much moisture in the soil can lead to equally serious concerns.

The Answer to Foundation Problems

Wall cracks aren’t necessarily a reason to become alarmed, since having a greater awareness of the actual cause can help make for more practical considerations. When and if foundation problems develop, make sure contact HD Foundations, an established company serving the Dallas, Fort Worth metroplex. We can answer your foundation repair questions.

"Our house was so bad that we had to move out so that the foundation repairs could be done - needed 34 piers in(...)

*Minimum of 10 foundation piers. Must mention this offer at time of free estimate. Applies to house foundation repairs only. Offer expires 12/31/20